Posted by Diarmuid O Gallchobhair on Friday, 9th December, 2011
Hurling
The Juniors E’s capped a fine season by claiming the Championship title on Wednesday the 30th November, on an extremely cold blustery evening, under the floodlights in Lawless Park, Swords against season rivals Skerries Harps.
With a starting line-up that has seen the team victorious in most of its encounters so far this season, Crokes started the better of the two sides, albeit with the advantage of having a strong wind at their backs. A couple of early points for midfielder Shane O’Keeffe from the placed ball settled the nerves and Crokes established an early dominance in all areas of the field.
After around 10 minutes a long ball in from centre forward Ciaran McGrath fell kindly for O’Keeffe to tap home from close range. This was followed up quickly with another goal from full forward Neale Martin, who shot superbly into the top corner from a good distance out.
The backs held strong for the first twenty minutes, marshalled well by centre back Adrian Creen and young full back John Huban. What’s more with the wind behind them the backs pushed forward, none more so that minor Connor Devins, who capped a fine run with a nicely taken point.
Having raced into a 2-6 to 0-1 lead, Skerries battled hard to finish the first half strong, knocking in some good points, although their goal came from a lucky break and was more down to the conditions on the night rather than any skill.
Facing into the wind in the second half, Crokes were under significantly more pressure. Barry Horan was moved back into midfield, with Ciaran McGrath moving back from the full forward line back out the pitch. This tactic worked very well, with Horan picking up a lot of loose ball around the midfield.
Again, an excellently taken point from O’Keeffe, who ended the night with 1-06 to his name, settled Crokes into the second half. This was soon followed up by a well taken goal from Barry Horan, who did well to take down and control a loose shot and bury it past the Skerries keeper from close range.
Skerries battled hard and had many good opportunities. However, the Crokes defence stood tall and batted away all goal scoring opportunities; none more so that keeper Paddy Tighe, who made an outstanding saving low to his left, when Skerries should really have scored. This was soon followed up by a goal line clearance from Huban, who had to kick away a ball that stopped dead on the line.
Crokes quickly broke down the field and when the ball fell to Horan in the corner he went on a fine individual run and again buried his second goal of the evening. Skerries tagged on one or two more points from frees, however Crokes held out to win the game with a scoreline of 4-8 to 2-10, a victory by 4 points.
All players on the night and throughout the season played brilliantly and the management and club would like to congratulate and thank all players for their efforts through the season.

You can view images of the encounter by clicking HERE or on the photo below! 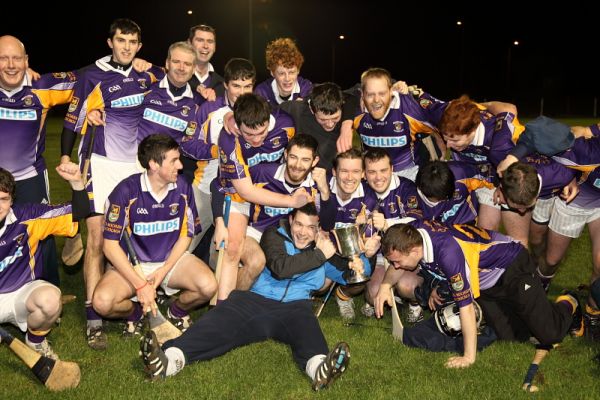