Team = Rory Garvey, Luke Ward, Daniel Corcoran, Darragh Harrison, Mark O Reilly, Colm Crean, Hugh Moran, Barra O Donoghue, Darragh Geraghty, Gavin Kirwan, Robert Breen, Mark McHugh.
Kilmacud Crokes team started well but it was clear that the visitors were ready for action and had the ball towards the Kilmacud goal early but the danger was averted. Crokes midfield began to get on top with colm and Hugh chasing every ball and delivering lots of good ball to the forwards. Crokes took the lead when Robert reacted quickest and whipped a good shot on the ground to the net.Hugh then scored an excellent point when a clearance came to him and he rose and struck it well over the bar. It was far from one way traffic as Luke, Darragh and Daniel kept the ball moving out of defence whenever danger beckoned. Colm then scored a goal and point in quick succession before the end of the 1st half. The 2nd half was much more competitive with lots of ball travelling between the half back line of both sides and with less goalmouth action. Crokes scored a goal when Darragh Geraghty reacted with a good ground stroke. From then to the end of the match, James Stephens took control and deservedly scored a goal and point to close the gap. Final score KMD 3-2 James Stephens 1-1.

Game 2 saw James Stephens take the game to Kilmacud from the off. Many shots were taken at goal and Barra was busy blocking shots and pucking out the ball. James Stephens had several chances early on but the defense held out with Mark O Reilly among the stars who cleared and worked hard to prevent scores. It was with one of the KMD first attacks that Colm scored a great point. Crokes then had a spell of pressure in which Mark Mchugh worked hard and was rewarded with a goal after some good dribbling and an excellent ground stroke. Gavin was doing trojan work at this stage and helped the ball move into the full forward line several times. Gavin then moved to goal where his excellent puck outs helped relieve the presssure many times. Luke then popped a great point when a clearance came to him and he struck the point from about 30 yards. Most of the remainder of the game was all James Stephens pressure. The Defense worked hard but James Stephens kept supplying their strong full forward who came close before eventually scoring a great goal after bursting though our defense. They then scored a point to bring the score down to a single point difference. However, this was the spur for KMD who got the ball back to the forward line and Robert struck a great line ball which when straight into the net to finish the scoring. Final score KMD 2-2 James Stephens 1-1.

In the first match, the visitors were strong in the tackle from the very first ball. Our guys showed the benefit of almost two years on the road playing more physical country teams though and were well up to the task. James Stephens scored first with a lovely point from a long way out. Christopher leveled the score up at one point a-piece shortly after. Daniel and Patrick Corbett made a number of fine interceptions in front-of the goal in that first half and Joseph was having a super match at half-back to take the ball, lift it and drive it up the field. In the second half, the visitors popped another point over but could not break down our resolute defence to score under the bar. Up front for Crokes, Hugo fought hard to run on to any balls that broke up towards the James Stephens goal and only narrowly missed scoring a number of times. Only a few minutes into the half, Conor turned his marker inside-out from the left of midfield and lobbed a high flying ball in towards the goal which delighted the strong home support on the sidelines as it sailed into the back of the net. The visitors pressed forward with time running out but couldn’t draw back the difference in the scoreline. A super match and very evenly balanced, it ended up with a similar scoreline to our match against Craughwell last week with each side having two scores on the board.

After taking on copious amounts of water on what was a beautiful warm morning, our team were ready to play the other half of the visiting squad. Once again our team started strongly, competing fairly for every ball that came their way. Jordan was playing a vital role in anchoring the half-back line at this stage in the game and clearing many balls all the way through to our half forward line. It was onto just one of these balls that Kieran came running, and after a smooth two-handed jab lift, he pivoted onto his left and sent it sailing over the bar to chalk up the game’s first score. The visiting team were kept under intense pressure all the way through and left very little space to work in as our lads made sure to steer them well out towards the sidelines whenever they had to ball to give them very tight angles to shoot from. Having said that, one or two of the James Stephens players were very unlucky not to get something on the scoreboard as they drove some fantastic shots from long distances that sadly for them sailed left and right of the posts. Much of the harrying around the midfield was coming from our two Hughs, Hugh O’Neill and Hugh Leyden who were both well into their stride at this stage. Chris chose his moment to pounce for his second score of the day with a well taken goal that stretched our lead. A couple of minutes later, Patrick Corbett ran in towards the goal 1-on-1 against the keeper and just before the point of impact with goalie, got his hurl under the ball to scoop it over the bar for a stylish looking point. At fullback Patrick Ryan continued to do trojan work running onto every ball and clearing it away from our lines and we managed to keep the visitors at bay as we drove on to score another point. In the dying minutes of the game, James Stephens drove in a strong shot which was blocked on the line by Kieran who was on goal duty. In the scramble that ensued we didn’t quite manage to get the ball away out of danger and the visitors pushed the ball over the line for what it has to be said was a well deserved score on the board given the number of fine chances they had had during the match that on any other day could have been scores. Once again a fine match where our lads had to work hard to get their well deserved second win of the day. Credit too to the fine display of hurling and fair play from the visiting team.

Overall these were great games and as can be seen from the scoring, there was nothing between these 2 clubs especially as we know that the visiting team had a number of U8's in there teams. It was great to see many of the KMD players being able to compete with James Stephens with lifting and striking of the ball and that our skill levels of many of the KMD players were similar to the players on the James Stephens teams.


As you can see from the photo - all the kids enjoyed the day especially as we adjoured to the clubhouse for tea, coffee and especially treats for the kids. A great day overall and we appreciated the visit of James Stephen to Kilmacud. 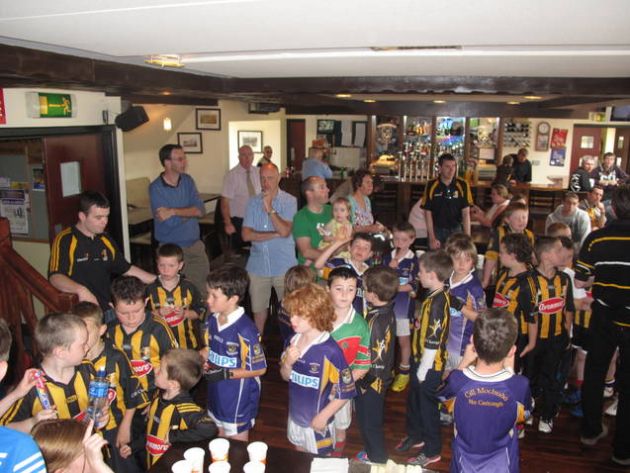 By Cian O'Connell Proud of a gutsy Dunloy display, manager Gregory O'Kane acknowledged that his...