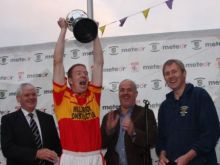 Large crowds, in much more clement weather than 2008, attended the six Sevens venues where 40 teams battled it out in the premier Meteor Cup, 16 in the Shield and 8 in the under 13 competition on Saturday 5th September 2009. The day was crowned with a fitting finale for the 38th Meteor Kilmacud Crokes All-Ireland Hurling Sevens when Moycarkey Borris prevailed over fellow Tipperary club Kilruane McDonaghs in a well contested final. After an immediate exchange of goals the victors went two majors clear.   The Cloughjordan men were then playing catch up and put in a mighty effort that proved unfruitful in no small measure due to the efforts of the winner’s goalkeeper and player of the tournament, John Kelly. The Meteor Cup was jointly presented to the winning captain by Conor Carmody, Meteor’s Director of Marketing and Seamus Howlin, Chairman of the Leinster Council.

Hurling Walls have been developed in many venues throughout the country in recent years and the Hurling Wall competition was devised to show how to optimally exploit such facilities.  The final was contested by the top five point scorers with Cokes senior Adrian Grogan ahead of the O’Loughlin brothers, Rob and Kevin, at the end. There was also an Under 13 competition won Lochlann McCarthy (Midleton) with Adam Tuck and Jim Gibbons both from Crokes second and third. The National Games Development Committee hope to develop the initiative into an annual National ALL IRELAND HURLING WALL Competition over the next 3 years, supporting the development of skill levels in the process.
Crokes honour Martin White 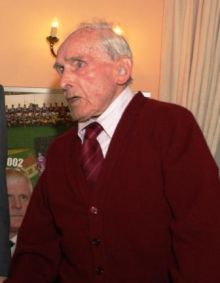 Before the day was done there was one last twist. Hurlers from six to sixty has been the subject of much debate in Kilmacud Crokes over recent years. On Saturday it was a case of nought to a hundred when at the conclusion of the Meteor Kilmacud Crokes All-Ireland Hurling Sevens the club celebrated the contribution of famed son of Kilkenny Martin White with a presentation to mark his centenary. Accompanied by his daughter Mary, son Martin and grandson Rossa, Martin was in fine fettle and confident of another All-Ireland success for the noresiders. Also in attendance were representatives of Martin’s home club Tullaroan led by vice chairman and All-Ireland medallist Bill Hennessey. For more click HERE
The Sevens was extensively covered in the media with both Newstalk and RTE Radio 1 broadcasting live from the event throughout the afternoon, RTE Television’s Six One News taking a live feed and RTE Television Sport recording to show as part of its Sunday All-Ireland Hurling Final coverage.
The Sevens festival supported the 'Headsup', text referral service from Rehab Care, which aims to help young adults in difficulty by offering support group information for a range of issues via Freetext on 50424.
As usual the massive organisational and logistical exercise that is the Sevens was pulled off with aplomb by Tom Rock and his team. Our thanks to them and to everyone in the club whose help and support made the day such a success. Our thanks also to Conor Carmody, Philip McGauran, Louise Tier and all at Meteor for their wonderful sponsorship of and empathy with the festival.

Fundraiser for the Order of Malta in Tipperary

By Cian O'Connell Tipperary GAA will hold a collection at Sunday's rescheduled SHC match between...

Three in a row MacCarthy Cup champions Limerick are the commanding force in today’s announcement...