On Sept 1st 2012 Kilmacud Crokes U12-hurling team travelled to Erin’s Own, Caherlag Co. Cork to play in the annual Colman Dillion Tournament.  Let’s be clear, this is not a memorial tournament!  Colman, himself is alive and well and continues to be delighted to invite U12 team on behalf of Erins Own club to this wonderful day of juvenile hurling where Crokes U12 won the day.

At the presentation of Cup to the Crokes team that evening Erins Own club Juvenile chairman commented   “Mol an oige agus tiochfaid siad”…. Praise the young and they will respond. While correct, what he could justifiably have said is “demonstrate how to do it right way and young and old will enjoy”. Take a bow all concerned at Erins Own. Erins Owns run an excellent tournament, create an special atmosphere for all attending, super catering for kids including hot food  & food for adults throughout the day. The children know they are being given stage to perform and enjoy and obliged throughout the day.  GAA people welcomed by the local GAA community.

When we arrived we learned that a tragedy had struck the local club in the week before these games as Jane O'Connell, daughter of the Erins Own chairman Liam O'Connell had passed away. All boys on all teams behaved impeccably during the minutes silence before the first game and final game of the tournament. On behalf of Kilmacud Crokes we extend our sympathy again to the O’Connnell family.

Kilmacud showed no effect after the journey as they powered into the game with a string of points from  Eddie Gibbons, Mark Grogan and Denis  Murray before Fionn O'Ceallaigh, Denis and Mark grabbed goals in the first half to lead well at half time

At the restart Ian Walsh converted a 65 and a great point from play before Fionn, Mark and Eddie replicated goals from the first half to complete an impressive win a with some powerful striking and defending from Joe Proudfoot and Tim Leary.

In the second game the excellent rotation of player by the mentors brought some new stars to the game. Sean Kinsella pointed a 65 to start before Rory Smith, Liam Wolfe, Denis & James Vos scored goals and Niall Comerford , Padraig Purcell and Eddie landed a string of points  to give Crokes a large  head start on the opposition.

Tim &  Ian scored excellent solo goals and Fionn doubled another to the net while Mark Grogan added two super points to close out the game and play for a place in the cup final in the last group game.

Mark and Denis struck early with points. Then Rory Smith worked a great goal after a hook and clean rob of defender and Sean Kinsella cut a sideline that went all the way to the net. Padraig Purcell shot a great point on the run to lead comfortably at half time.

In the other group of four, Dicksboro were powering to wins over Blarney, Carrigtwohill, & Kilmallock.

This was a repeat of the great final in Kilkenny in July so we looked forward to some wonderful hurling.

Crokes started very slowly as the Kilkenny boys went in for three quick early points. There is however a definite sense of occasion about this team and they started to hurl and responded with 3-2 with goals from Fionn (2), Rory and 2 points from Eddie Gibbons. A feature of the game was catching skills shown by Niall Comerford, James Dillon and Tom Stakelum and super running teamwork at all times. Boro replied with 2 points before Rory finished a great move to the net and Eddie & Fionn finished with points. Half time Crokes 4.4 / Boro 0.5

The second half had just started when Rory ran on to a long clearance to goal again. James Kos and Niall goaled in the second half and a string of points from Sean, Denis, Padraig & Eddie. Eddie and Padraig caused untold trouble to the Boro defenders as their touch and mobility really troubled the Kilkenny team on the right wing. There was wonderful sweeping moves the full length of the pitch and an overall hurling display that had the locals talking of the skill and talent within the group. Players and mentors, take a bow. 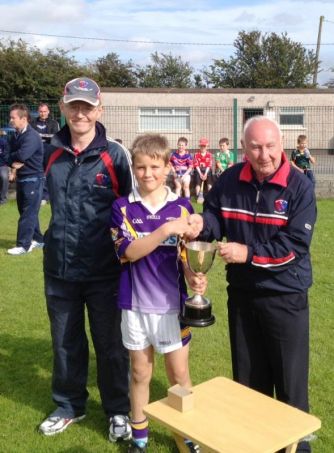 James Dillion the KC captain collected the cup from Colman Dillion and thanked all concerned with some nice words.

U12 Crokes Squad in Cork: 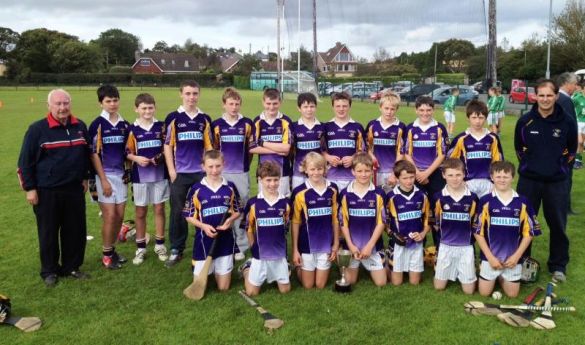