Sports Star of the Year 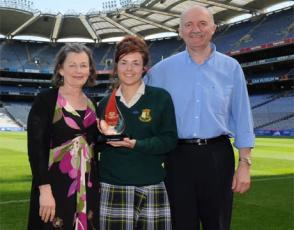 Our very own Claire Young of the Minor and Senior teams scooped the Evening Herald Sports Star of the Year Award.

Claire had some very stiff competition for this award.

Among the contenders were, Deirdre Duke a very talented Ladies footballer who was nominated for her hockey achievements and  Siofra Cleirig Buttner an up and coming Athlethics star who quit ladies football to concentrate on her running career. (Our loss is Ireland's gain and we have no doubt that Siofra will do us proud on the international stage in the very near future).

Claire has won All Ireland Medals with the Dublin U14 as well as  schools All Ireland and Leinster Titles with Colaiste Iosagain who claimed the All Ireland Ladies Post Primary B Championship this year.

Claire's dad John Joe who is involved with the U15 ladies team is a big influence on Claire's football career.

"My Dad is a big Gaelic man. Hes from Kerry and he has connections to the Kerry team as well. Ive been brought up going to the Kerry matches so Im very influenced, but of course I have to say that I love Dublin as well," she said yesterday.

Claire who scored three crucial points in the school championship final, says she is constantly encouraging more girls to play and support football.

"Im told its the fastest growing sport and I think that's a really good thing. Id advise everyone to get involved and support the girls," she said.

"I train whenever I can, roughly three or four times a week. Its a lot of work and you have to be dedicated to it. Its a good distraction from study and the social aspect of it really attracts me to it.

Claire was nominated for the Evening Herald award because of her commitment in every match and training, and for the leadership she provided to her teammates throughout the season.

Congratulations  Claire   - Kilmacud Crokes and Colaiste Iosagain Sports Star of the year - We' re all very proud.

An exclusive documentary produced by Her Sport will be aired on TG4 to celebrate and...

BOTH Antrim and Fermanagh have named unchanged starting teams as they look ahead to tomorrow’s (...

The Irish Times Sport Ireland Sportswoman of the Month for July 2022 is Meath Footballer Niamh O...